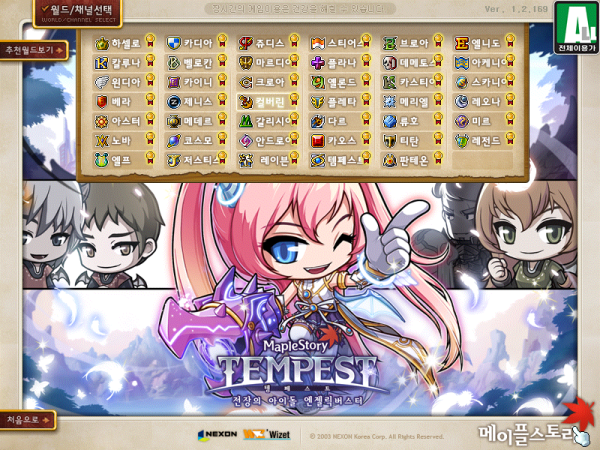 The Nova pirate, idol of the battlefield, Angelic Burster has been released! Alongside it, some events and hints towards Hyper Skills as well as some new features for potential! Read on~ 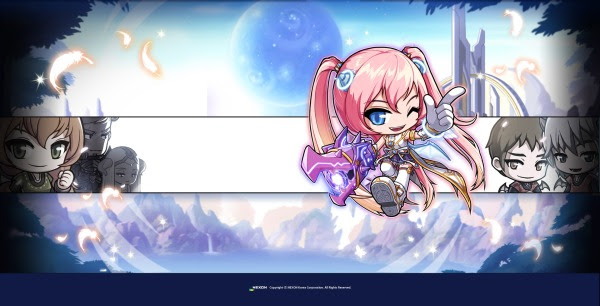 Something I’ve been forgetting to post has been the backgrounds for each update (some people like to use them), so here’s Angelic Bursters! I’ve also uploaded Luminous’s (although he’s not in it…) and Kaiser’s.

There are now two Nova race characters on the character creation screen, haha.

When creating an Angelic Burster, you can only be female. You have a choice between two hairstyles and two faces, as well as any hair colour.

Like Kaiser, Angelic Burster has a new item slot for Emblems. She gets it at level 60 and a better one at level 100. They can have potential!

There’s also the Dress Up system. Angelic Burster has her normal mode and her Dress On Mode.

Using any skills or attacks will automatically transform you into your Dress On Mode. You can also use your beginner skill Dress Up to manually transform! Using Dress Up when transformed will change you back to your normal form.

You can change how your transformation looks by using your Coordinate window. Only Cash equipment can be put in here (obviously), so you won’t look exactly like everyone else. 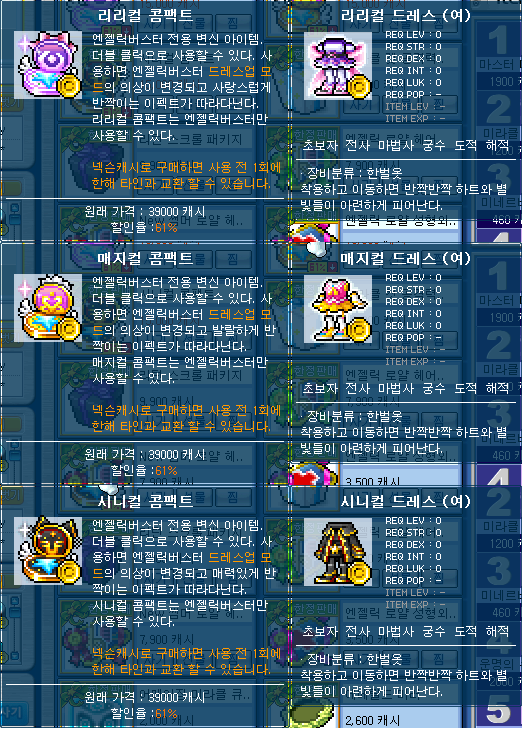 In the Cash Shop, they released these Compacts, which hold overalls for Angelic Burster. They cost 15,000 NX each (and a whopping 39,000 NX when they’re not on sale, that’s crazy!!).

Angelic Burster uses the Soul Recharge system! She does not have MP for this reason. There are six Soul Recharge skills, which basically means those skills cannot be used if you haven’t Recharged them. Both your basic attacks and many of your attacking skills have a chance at Recharging, and your Affinity skills will help increase the chance of it happening.
When you do Recharge, an animation will appear above your head and all 6 (depending on your job advancement) skills will be Recharged.
The three skills that can be used without having a Recharge are your basic attack (Successor), Pink Scud (2nd job), and Land Crash (3rd job).

When you use a Soul Recharge skill (and it doesn’t Recharge itself), it will become greyed out on the UI on the side of your screen. This does not mean however that you cannot use any Soul Recharge skills. Each one has a different ‘ammo’ of 1, which is filled up when you Recharge.

Here’s Angelic Burster’s tutorial~ As you can see, the first part is basically a mirror of the later parts of Kaiser’s tutorial. It seems that after Kaiser (whose canon name is Kyle…) unleashes his power, he collapses. But it wasn’t enough and Tear has to finish them off with her own newfound powers.
It wouldn’t be complete without Angelic Burster’s transforation! Hehe, it’s so ‘magical girl-y’. Is it just me that finds her voice a bit annoying? 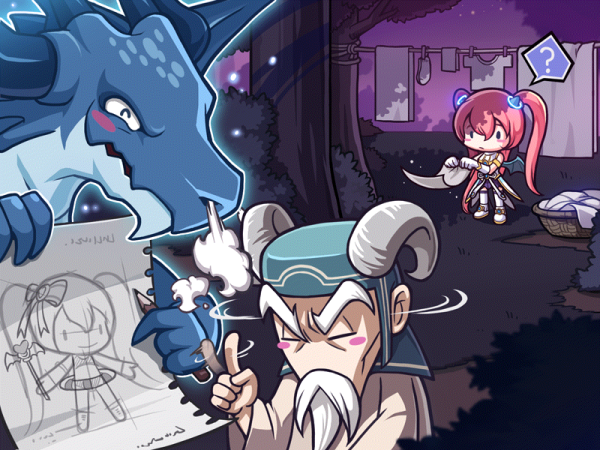 Angelic Burster uses the power of Escada, a dragon. I guess the cube gave her the power to communicate with him. 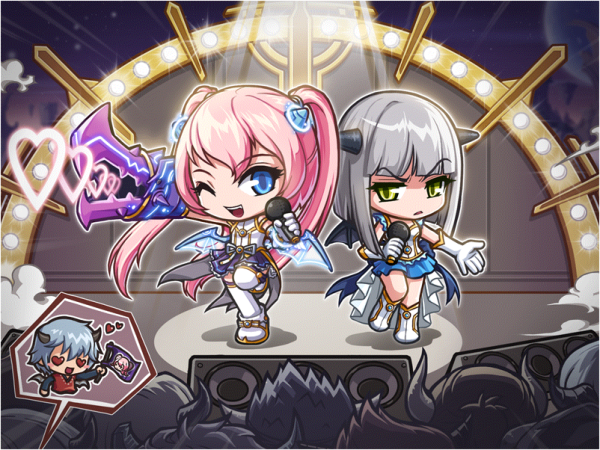 Of course, Angelic Burster is a popular idol. Kaiser is her biggest fan! The girl beside her is Idea, I guess she’ll play a part in Angelic Burster’s storyline.

Her job advancement animation is a pink version of Kaiser’s, haha. 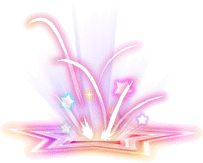 Thanks to Fiel of Southperry for skill icons and effects! Thanks to 도족텐 for skill effects labelled with his name! 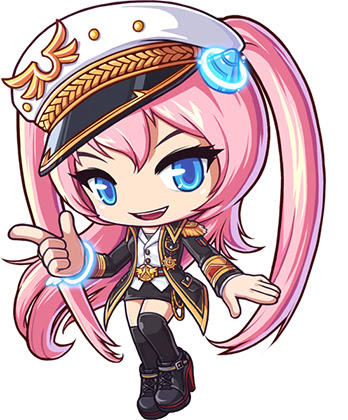 One final entry was posted in Inkwell’s Secret Diary yesterday, with the third and last of Angelic Burster’s outfits! I think this is her best one, haha.

An event has begun called the Idol of the Battlefield Open Celebration event! First off, all Angelic Bursters get a Limited Gift at level 10, giving them a permanent Strawberry Cash set (hat, overall, shoes, weapon) as well as a permanent Double Pink Pegasus mount! 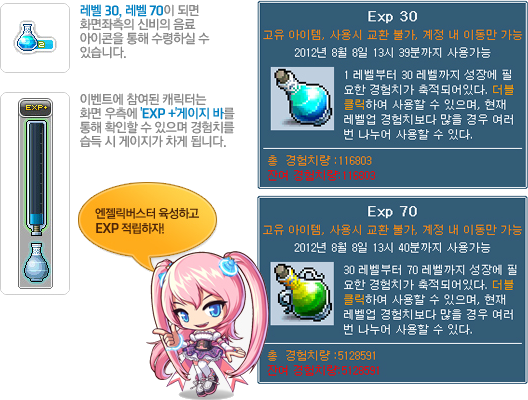 The 1 + 1 event has returned! For those of you unfamiliar with it, as you level up on your Angelic Burster, you’ll fill up the EXP+ Gauge Bar on the side of your screen. At level 30 and 70, the bar will be filled, giving you a potion (EXP 30 or EXP 70). These potions will hold all the experience you gained.
You can then use the potions to gain the experience or transfer them to another character~ However, once you use it even once, it becomes untradeable. 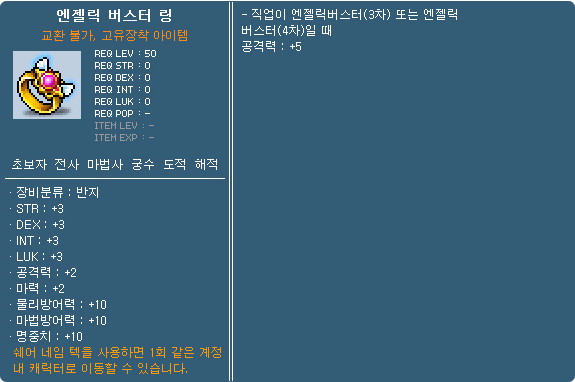 At level 50 you get the Angelic Burster Ring, which gives 3 to all stats, 2 attack and magic attack, and 10 accuracy, defense, and magic defense. It can be traded through the account with a Share Name tag.
If you’re a 3rd or 4th job Angelic Burster, you get an extra 5 attack! 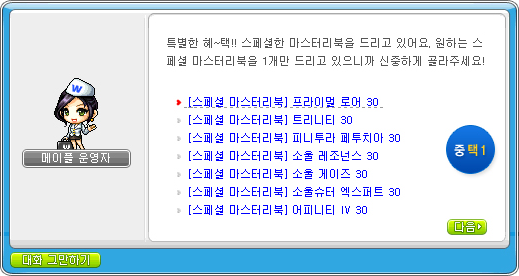 Of course at level 70 you can choose one Special Mastery Book. 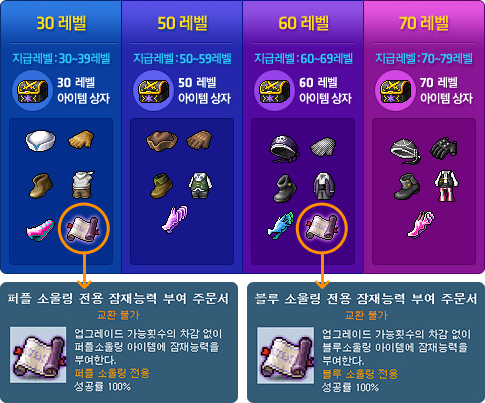 At the above levels, you’ll contain boxes that hold equipment for you~ They’ll also come with Potential Scrolls only for your Soul Ring (Purple at 30 and Blue at 60) that will give them potential with a 100% chance!

Once again, you’ll get a free 1.5x Experience Coupon at each of the above levels. 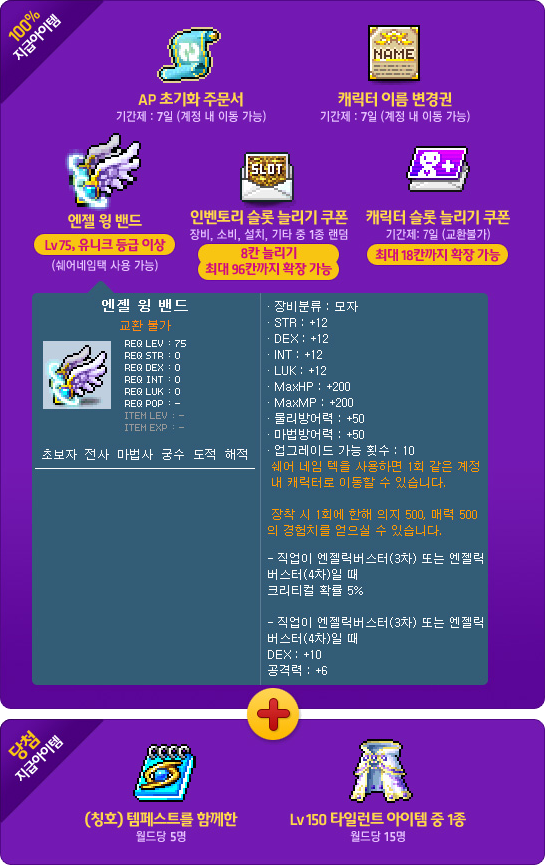 There’s a couple of Hot Times as well. The first, on August 11, gives an AP Reset Scroll, Character Name Change Coupon, a random Inventory Slot Expansion Coupon (8 slots), a Character Slot Coupon, and the Angel Wing Band, Angelic Burster’s Hot Time hat!
It gives 12 to all stats, 200 HP and MP, 50 defense and magic defense, with 10 slots. If you’re a 3rd or 4th job Angelic Burster, you also get 5% critical chance, 10 dex, and 6 attack! It also comes Unique on reveal~ 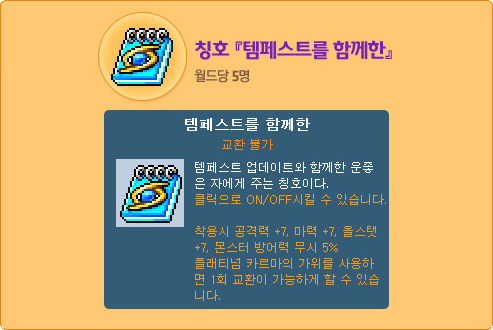 5 people per world can also get the Tempest title, which has amazing stats. It gives 7 to all stats, 7 attack and magic attack, and 5% defense ignore. It can be traded with the Platinum Scissors of Karma. 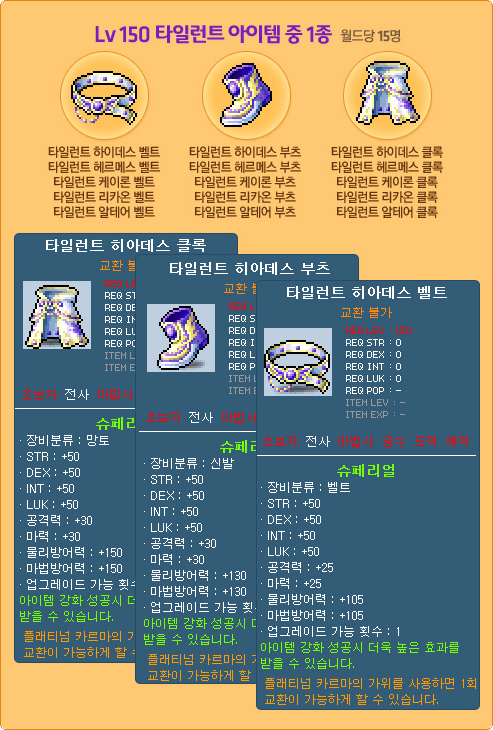 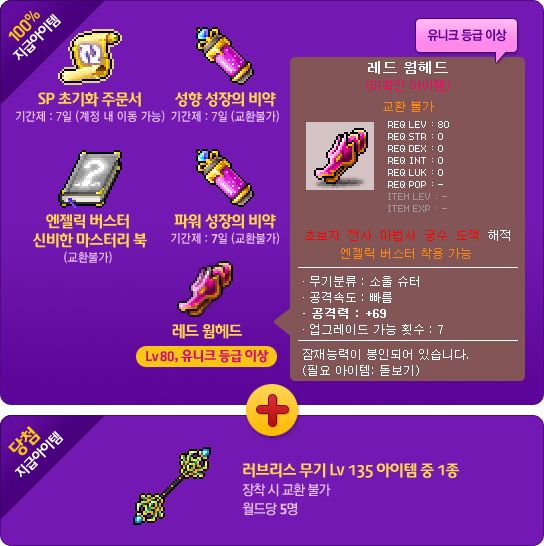 There is one more Hot Time on August 12. This one gives an SP Reset Scroll, Angelic Burster Mystery Mastery Book, a Personality Growth Potion, a Power Growth Potion (gives experience), and a Unique on reveal Red Wormhead, the level 80 Soul Shooter.
5 people per world will also be lucky enough to get a Loveless weapon.

Oh yeah, in the last Tespia patch, Spadow (thanks to him for the skill effect!) found a new skill for Luminous. Although it has no strings, it does have all its skill data and the delay on it reveals the name as Armageddon.
It has a max level of 5, and deals 1500% damage 6 times on up to 15 enemies with a 100% chance of restricting enemy movement and skills (a la Demon Slayer’s Dark Binding) for 20 seconds. It has a cooldown of 60 seconds. Could this be Luminous’s Hyper Skill? One more thing was added in this patch, that may surprise you. I don’t know if it’s intended or not, but medals can now have potential! Bahaha, another thing to cube. I guess the best medal now (other than the level 200 medal) is the Time Traveler one from Neo City.
Apparently this applies to Pocket items too. Haha, Nexon Korea messed something up, you can potential almost anything now! Angelic Blessing ring, Android eggs, any shoulderpad, even your mount saddles!
Credit : http://orangemushroom.wordpress.com/2012/08/08/kms-ver-1-2-169-idol-of-the-battlefield-angelic-burster/
Posted by Unknown at 03:15